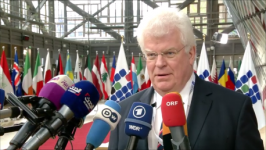 Comment by Permanent Representative of Russia to the EU Ambassador Vladimir Chizhov upon arrival to the Conference ”Supporting the future of Syria and the Region”. Brussels, 25 April 2018

Address by Ambassador Vladimir Chizhov, Permanent Representative of the Russian Federation to the European Union, at the Second International Conference ”Supporting the future of Syria and the Region”. Brussels, 25 April 2018

I would like first of all to thank the organisers of the Second Brussels Conference on "Supporting the Future of Syria and the Region" for focusing on humanitarian problems of Syria, a country Russia traditionally enjoys friendly relations with.  These problems are caused by an internal crisis that has continued for seven and a half years now, a crisis fuelled, among other factors, by various forms of foreign interference. The development of the crisis has led the Syrians to suffer an onslaught by international terrorism against their country, unprecedented in atrocities and scale. We were among those who strongly supported Syria at that moment, including by military means. This support determined the defeat of the main military and political stronghold of terrorists, ISIS (Daesh). The efforts by Russia, Turkey and Iran who jointly established the Astana format in support of the Syrian settlement genuinely enabled progress towards a political solution to be attained via a broad intra-Syrian dialogue and talks under UN auspices as envisaged by UNSC Resolution 2254. The Sochi Congress of Syrian National Dialogue was another contributing element to the whole picture. We are convinced that the key to success on this track lies with ensuring compliance of all influential international and regional actors with their obligations regarding the unity, sovereignty and territorial integrity of the Syrian Arab Republic.

Therefore, I should say I am perplexed by the format of today’s meeting that does not include official representatives of the Syrian government. It looks strange, to say the least, that the distinguished delegates are planning to help Syria in a situation when official contacts with the legitimate government of the country have for many years remained a taboo for European politicians, and some states have even been promising “not to give a cent” until political change takes place in Syria. These European capitals seem to forget that today the Syrian government controls more than three quarters of the country’s territory where some 90 per cent of the population live. It took the Syrian people much effort and means to win these territories back from international terrorist groups, for the country to be liberated from ISIS yoke.

We agree that aid must come to everyone in need wherever they are – in Eastern Ghouta, Aleppo, in the villages of al-Fu'ah and Kefraya still besieged by terrorists, in the city of Raqqa totally destroyed by US-led coalition bombings and half-forgotten by the international community, or in the Rukban camp for IDPs with no access available due to a fifty-kilometre “security zone” around al-Tanf unilaterally established by the US.

We are surprised by the following fact. When the Syrian armed forces were liberating Aleppo, or Eastern Ghouta from terrorists, the international community virtually went crying loud that a humanitarian catastrophe was allegedly unfolding there. This was as long as militants were there. But once the issue was resolved nobody cared about the future of Syrians who had been living and continue to live there. Today conditions in Aleppo are gradually, albeit slowly, improving, with electricity and water supply being restored, schools and hospitals reopening. The image is quite different in Raqqa, where virtually no building was left intact after the air and artillery attacks by the US-led coalition. Life conditions there are indeed unbearable: whole city areas are still mined causing death every day, there is no water, no electricity. But until recently this appalling situation seemed not to deserve attention. UNSC Resolution 2401 which Russia supported and significantly contributed to its implementation clearly stipulates that humanitarian issues should be addressed on the whole territory of Syria. Therefore, we reiterate that these issues must not be politicised and used as instruments of pressure. Providing such assistance should not be linked to attaining certain political goals, as some Western capitals presume.

On 14 April the international community witnessed an unlawful act against Syria which was targeted by an intimidating missile and bomb attack. It is becoming increasingly evident that this act of outright aggression was carried out by the US, Great Britain and France on an invented pretext, at a moment when OPCW experts were on their way to Douma. Evidently those countries and those expressing support for their action are not interested in investigation of the allegations of a “chemical attack”. There is particular cynicism in efforts to base it on “humanitarian” concerns and justify by referring to the controversial notion of “humanitarian interventions”. The experience of Iraq, Libya, Afghanistan convincingly demonstrates that living standards cannot be improved in such a way – whole countries, including relatively wealthy ones, are plunged into lengthy chaos, doom to victims and suffering.

We believe the stance of those countries that maintain financial and economic sanctions suffocating the Syrian people, refuse to participate in restoring social and economic infrastructure is not only inhuman but also counterproductive. Devastation, extreme poverty and despair form a fertile soil for new extremism to emerge and preserve conflict potential for many years ahead.

We are seriously concerned by the forms and mechanisms of providing humanitarian aid. It is one thing to accumulate the allocated funds on the accounts of specialised humanitarian agencies, and quite another to transfer them directly to recipients in the form of cash. The latter scheme is fraught with having them diverted to purposes quite different from those the donors are willing to achieve. Cases are known when aid received was then sold at exorbitant prices, the proceeds from such trade used to buy weapons for terrorists, recruit new militants.

We strongly believe that establishing close cooperation between potential donors and legitimate authorities of the Syrian Arab Republic would facilitate a better humanitarian situation in Syria and prompt normalisation of the situation.

Russia is one of the key humanitarian donors of Syria providing humanitarian assistance both via specialised UN agencies, as well as the International Committee of the Red Cross and bilaterally.

Besides, it was Russia that facilitated efficient contacts between UN bodies in charge of humanitarian aid issues and the Syrian government. The Russian military repeatedly secured access of UN convoys to those in need in different regions of the country.

A major aspect of Russian humanitarian aid granted bilaterally is its targeted character reflecting the real needs of the Syrian population. It includes food and necessities, construction equipment and materials, pharmaceuticals and medical equipment.

Part of humanitarian aid is delivered to Syrians via the Russian Ministry of Defence. The Russian military ensure its direct distribution among those in need. For instance, food sets are handed directly to the people so that any abuse is avoided. Russian military doctors treat the locals free of charge.

We are ready and willing to cooperate with all those, including countries, other entities and international institutions, who are genuinely committed to helping the Syrian people to start a new peaceful life, turning the tragic page of the bloody civil war. Believe me, Syrians of all nationalities and religions deserve no less.