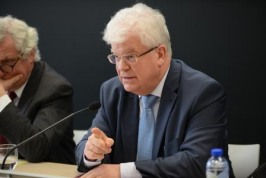 On 24 April 2014 a High-Level Conference «What Future(s) For European Energy Governance?» was organised by College of Europe in Bruges (Belgium). The Director-General for energy of the European Commission Mr. D.Ristori, members of the diplomatic corps, scientific and expert community took part in the conference. The Permanent Representative of Russia to the EU Ambassador Vladimir Chizhov gave an overall assessment of Russia-EU cooperation in energy sphere and emphasized the high importance of interaction of both Parties in this area to promote social and economic development of Russia and the EU Member States.

Address by Ambassador Vladimir Chizhov at the conference «What Future for European Energy Governance?». Bruges, 24 April 2014