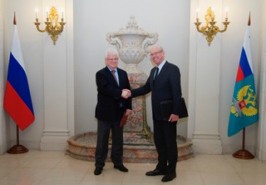 On 29 March Ambassador Vladimir Chizhov, Permanent Representative of Russia to the EU, met Matthias Burchard, Head of the Representative Office of the United Nations Relief and Works Agency for Palestine Refugees (UNRWA) in Brussels. The parties held an in-depth exchange of views on the humanitarian situation in the Middle East in the context of the Syrian crisis, including the living conditions of Palestinian refugees residing in Syria and other countries of the region.

M.Burchard expressed appreciation of Russia’s contribution to the assistance for Palestinian refugees, both on a bilateral basis and through the channels of international organisations, including voluntary contributions to the UNRWA budget.

The significance was also stressed of the upcoming visit of UNRWA Commissioner General Pierre Krähenbühl to Moscow on 6-7 April 2017.