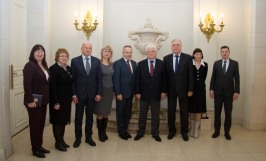 On 7 February Permanent Representative of Russia to the EU Ambassador Vladimir Chizhov received a delegation of the Dmitrov Municipal District of the Moscow Region.

The delegation led by the Head of the District, Valery Gavrilov visited Brussels for meetings at the European Parliament and the European Committee of the Regions together with officials of the Rems-Murr District of the Baden-Württemberg federal state of Germany in order to further enhance cooperation between the two regions.

During the meeting at the Russian Mission to the EU Valery Gavrilov informed Ambassador Vladimir Chizhov on the state and prospects of inter-municipal cooperation with German partners, including in the context of the current state of Russia-EU relations.