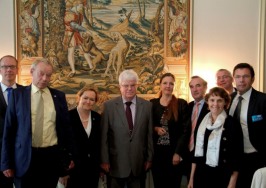 On 23 June 2015 Ambassador Vladimir Chizhov, Permanent Representative of Russia to the EU met a delegation of the German-Russian Economic Union comprised of around 3000 small and medium size enterprises, led by Dr. Hanno Stöcker.

In the course of the meeting the parties discussed a number of issues related to promotion of economic relations between Russia and Germany, as well as other EU member states, against the background of the EU sanctions policy. Representatives of German SMEs noted the negative impact of anti-Russian restrictive measures on EU companies and called for their lifting as soon as possible. In turn, the Ambassador stressed that Russia stands for equal and friendly relations with all countries of the European Union which remains its important trade partner. As for the decision concerning sanctions rollback, the ball is in the EU court since it was initiated by the EU in the first place.