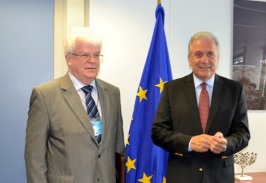 Оn 20 July a working meeting between Ambassador Vladimir Chizhov and EU Commissioner for Migration, Home Affairs and Citizenship Dimitris Avramopoulos was held in an open and frank atmosphere. Among a broad range of issues, the state of play in the field of migration in the EU, as well as various issues of interaction of Russia and the EU in the sphere of migration and law-enforcement were discussed.

Ambassador Vladimir Chizhov briefed the Commissioner on priorities in the field of migration of the Russian Presidency in the BRICS, as well as on the plans of the Russian International Affairs Council to hold a conference on migration in Moscow in the beginning of 2016. Certain aspects of implementation of the Russia – EU 2006 Agreement on Visa Facilitation were also touched upon.