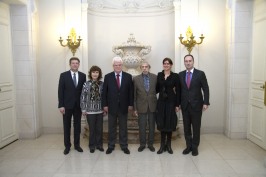 Eduard Artemyev is a well-known Russian composer of the second half of the 20th century, author of the scores for films by Andrey Tarkovsky, Nikita Mikhalkov and Andrey Konchalovsky.

Maestro will participate in the Russian Days festival that will take place on 16-18 December in Brussels in the Flagey concert hall. The event will also feature films by Russian filmmakers, meetings with Russian writers and a performance by People’s Artist of Russia, pianist Nikolay Lugansky.