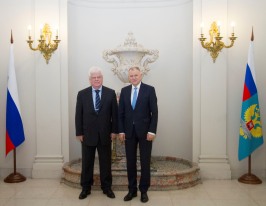 Permanent Representative of the Russian Federation to the European Union Ambassador Vladimir Chizhov met Member of the European Commission for Health and Food Safety Vytenis Andriukaitis on 11 December 2017 in Brussels.

The Commissioner gave a positive assessment of the outcome of his negotiations with the Minister of Agriculture of the Russian Federation, Alexander Tkachev, and the Minister of Health of the Russian Federation, Veronika Skvortsova, held within the framework of his visit to Moscow to participate in the First WHO Global Ministerial Conference «Ending TB in the Sustainable Development Era: A Multisectoral Response» (16-17 November 2017).

The Permanent Representative and the Commissioner discussed possibilities to intensify bilateral cooperation on tackling the problem of microorganism resistance to medicines (chemical and biological agents), as well as contacts between the Russian Federal Service for Surveillance in Healthcare (Roszdravnadzor) and the European Medicines Agency in order to increase efficiency in the fight against falsified, unregistered and counterfeit medicines.

They highlighted the importance of joint efforts to fight transboundary animal diseases, such as the African swine fever, Avian flu and rabies, as well as positive experience and prospects of wider use of Russian and EU electronic systems to ensure safe trade in food.