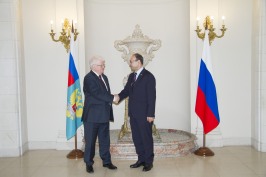 The discussion focused on the results of Russia – Iran – Turkey Summit (Ankara, 16 September) in the context of settlement in Syria, prospects of the launching of the Constitutional Committee. They also exchanged views on the current state of Russia’s and Syria’s relations with the EU.