Ambassador Vladimir Chizhov delivered a speech in the European Parliament 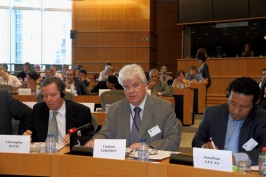 On June 27, 2011 the Permanent Representative of the Russian Federation to the European Union Ambassador Vladimir Chizhov spoke at a round table entitled “The peace process and the role of key regional and international players” at Conference on the Implementation of a New Strategy for Afghanistan organized by the Progressive Alliance of Socialists and Democrats at the European Parliament.

Ambassador Chizhov outlined the principal elements of Russian approach to the situation in Afghanistan in the light of UNSC Resolutions 1988 and 1989 and the beginning of the process of transfer of authority from the international community to the Afghan Government. He stressed Russia’s concern with the growing activity of extremists and expansion of terrorist activity to neighbouring states, as well as the situation in combating drug production. Ambassador Chizhov specifically mentioned that Afghanistan needs to consider restoration of its neutral status after the withdrawal of foreign forces.

He pointed out that the Russian Federation is ready to implement common projects with other partners in restoring a number of Afghan agricultural and industrial establishments originally built by Soviet specialists.