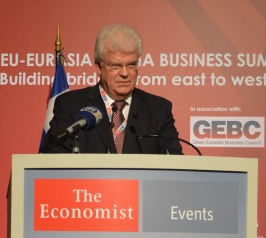 Statement by Permanent Representative of the Russian Federation to the European Union Ambassador Vladimir Chizhov at the EU-Eurasia-China Business Summit organised by The Economist. Athens, 9 October 2017

The topic of our session – “Setting the geopolitical stage” for convergence of leading power centres in Eurasia – is ample demonstration of how rapidly the world is evolving. We are witnessing yet another, the fourth in succession, “industrial revolution” (though, in classical terms it should probably be referred to as a post-industrial one). The new technological order entails an irreversible transformation of our societies. This results not only in the growth of general well-being – which is distributed rather unequally, by the way – but also in more acute controversies caused, in particular, by imbalances in global development and increasingly limited resources.

In political terms the world seems to no longer fit into the Procrustean bed of ideologically driven mantras of the early 1990s about the “the end of history”. That model of globalisation, which was aimed at ensuring leadership and prosperity for the chosen few, has become obsolete. Its key features were erosion of the legal foundation for international relations, inability to efficiently address emerging challenges and a high level of instability. Illegitimate military operations, sanctified with noble slogans, were throwing whole regions into chaos. As a result, all our countries and peoples are now facing the consequences of those actions, be it in the form of surging terrorist threat or waves of migration.

Today some are still tempted to uphold their claim to unilateral hegemony in global affairs by sheer force. Instruments of military and political containment, economic sanctions and information warfare are deployed – often to their initiators’ own detriment – against those who seek to pursue an independent foreign policy. Alas, we are witnessing such flawed logic in the European Union’s approach towards relations with our country.

But, as I already mentioned, the world is changing. The dysfunctional “postbipolar” model is giving way to a more democratic multipolar order. In other words, the familiar West-centric map of the world no longer seems to tally with modern realities today. And it will certainly not do so tomorrow. According to forecast by “Price Waterhouse Coopers”, only two countries belonging to the traditional West – US and Germany – will remain in the top ten of the world’s leading economies by 2050. I believe this is an objective process reflecting, among other things, the cultural and civilisational diversity of the modern world.

At a time when macroregions are increasingly gaining global economic clout we, namely Russia, China and the EU, should reflect how we can turn our shared Eurasian continent into an area of peace, prosperity and development. Let me remind you of a recent comment on Russia-EU relations by the Federal Chancellor of Germany Angela Merkel who said that “we share the same landmass”. At least this albeit superficial acknowledgement should encourage us to think in terms of cooperation and search for ways of pragmatically making use of the realities of our common neighbourhood and in our own interests. On my part, I am confident that it is through broader cooperation in Eurasia that our countries will be able to find new drivers for domestic growth, enhance our competitiveness and untie the numerous problematic knots in the region.

The prerequisites are all there. Integration processes are actively unfolding in Eurasia. Together with its partners Russia is building the Eurasian Economic Union. We note that this key project, based on mutually beneficial convergence of regional economic potentials, is generating growing interest worldwide. Crucially, the Eurasian project is clearly in tune with the “One Belt, One Road” initiative launched by the Chinese leadership, as well as with multilateral formats gaining weight, including the Shanghai Cooperation Organisation and BRICS. The establishment of an integrated network of transport routes between Europe and Asia currently in progress can lay the foundation for a genuinely broad Eurasian partnership, a common space from the Atlantic to the Pacific. As stated by the President of the Russian Federation Vladimir Putin, in achieving this goal we are open to cooperation with all willing players, on the basis of equality, respect of mutual interests and international law in all its entirety.

We will continue to strive to promote these fundamental principles in our relations with the European Union. Unfortunately, our cooperation that covers over a quarter of a century suffered a serious blow in the recent years. The short-sighted bet on confrontation and sanctions made by the EU in 2014 has failed to achieve its goals, something quite obvious for many, if not everyone, today. This policy has not brought peace to Ukraine, but on the contrary, encourages the Kiev authorities to procrastinate the implementation of the Minsk agreements. It is dividing countries of the “common neighbourhood”, preventing their progressive development in harmony with their neighbours both in the East and in the West. Mutual trust has been seriously undermined and the fabric of people-to-people contacts ruptured. The situation has been further compounded by the nefarious practice by some forces inside (and, I should add, outside) the EU to utilise the mythical “Russian threat” as a bogeyman to explain the surge in Eurosceptic sentiment and divert attention from domestic tensions and controversies. This is hardly a cause for optimism. Especially since the situation is being exploited by those who try to camouflage their attempts to conserve the archaic bloc architecture in Europe with lofty notions of “Atlantic solidarity” while at the same time promoting their military-industrial and energy interests here. Persistent efforts by NATO to build up its military presence and infrastructure in areas bordering Russia are of particular concern. As are, obviously, efforts to deploy elements of the American global missile defence system in Europe.

Let me stress that we are not preconditioning in any way the amelioration of the Russia-EU relationship. We are ready to equip ourselves with “strategic patience” and wait until the EU realises that for a whole range of historical, economic, cultural and civilisational reasons we – Russia and the EU – need each other. As was correctly stated by the President of the European Commission Jean-Claude Juncker at the recent EU Ambassadors conference, “there is no European security for centuries ahead without Russia”. In the spirit of reciprocity, I would like to assure you that Russia too is interested in an independent, united and strong European Union able to take principled decisions on its own while playing a responsible role in the foreground of global politics on the basis of international law.

Obviously, we will not be going back to the previous model of “strategic partnership” in our relations with the European Union, which failed to endure the challenge of the Ukrainian crisis. Anyway it seems that neither party is eager to enter the same river twice. It is up to us, however, to identify a new, more sustainable paradigm of cooperation acting in the spirit of equality and respect of each other’s interests. The establishment of contacts and gradual approximation of the European and Eurasian integration projects as parts of an inclusive polycentric world order could serve as an important step in this direction. We hope that the ongoing period of internal reflection within the EU will be used to finally outline some fresh and realistic approaches to this effect. And when this happens, our partners will know where to find us.