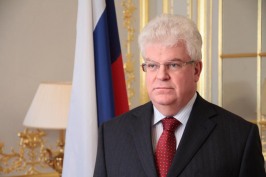 Euractiv: Let’s start with Brexit. It is generally assumed that Russia would like to see Brexit happen, so that the EU would be weakened. Is this a correct assumption?

Vladimir Chizhov: No. I wonder why people think that Russia would want to destabilise the EU, or to break it up. That has never been the aim of Russian foreign policy. Actually we’ve always said, and I have personally said more than once, that we want to see the EU as a substantial pole of influence and power in this multipolar world of ours, to have a coherent position on various issues and of course to act independently. Which is not always the case today.

Euractiv: You mean that the EU is acting as a subcontractor to the USA?

Vladimir Chizhov: I leave the definitions to you. But on many occasions we have seen that, and it was admitted, for example by Vice President Biden, when he described that the US had to twist the arms of the Europeans to make them join the sanctions campaign.

But I think the EU, when it acts as a single entity on the world scene, can and should play an important role, perhaps more often than has so far been the case. I understand the difficulties of bringing together sometimes very diverse positions of 28 member states, and there is no clearer illustration to that than the current migration crisis.

On Brexit, which was your question, Russia has no part in that. Neither do we have any part in the Dutch referendum of 6 April.

Euractiv: It is assumed that Russia does, in a covert way.

Vladimir Chizhov: There are people who believe that everything that happens in the world should be attributed to the Kremlin and personally to President Vladimir Putin. That’s very flattering of course, but it’s not the case on many occasions. We have taken due note of the intricate compromise solution that has been achieved. Of course, I understand this is not the end of the road, particularly on the British side, because PM Cameron has to convince his own electorate, on all sides of the political spectrum, including his own party. We will see what that leads up to.

Euractiv: You mentioned the Dutch referendum. If the Dutch vote against Ukraine’s Association Agreement with the EU, will Russia consider this agreement void?

Vladimir Chizhov: First of all, if they come to vote in substantial numbers, and I think they have a threshold of 30%, and if a majority of those vote against, then this will trigger a chain of events, the details of which remain to be seen. And I’m not aware of all the intricacies of the Dutch legislation on that. But as far as Russia is concerned, I’m afraid it will not have a big impact immediately. Because the Association Agreement has entered into force provisionally as of 1 January. To put it squarely: the damage has already been inflicted.

So whether there will be a lengthy process of renegotiation depends on how Dutch democracy manages to pull itself out of this problem.

Euractiv: You mentioned the refugee crisis. Indeed, it creates divisions between the EU members, and again, there is the suspicion that the military action of Russia in Syria has increased the flow of refugees to Europe. How would you comment?

Vladimir Chizhov: There have been many misinterpretations and unfair descriptions of Russia’s role in Syria. By the time Russian air force launched its operations in Syria, on 30 September last year, the conflict in Syria had been raging for over four years. So when some TV channels are showing destructions in Aleppo, most of those buildings had been destroyed years ago.

And as far as refugees are concerned, more than 11 million refugees had fled Syria before the Russian air campaign started. I strongly believe that the Russian factor in this situation, the combination of air campaign and Russian diplomatic efforts, have opened the way to a political settlement. I agree with what many people are saying, that if there is to be a solution to the Syrian crisis it will have to be a political solution. On the other hand, if we are to jointly defeat ISIL and the like, without use of force that would be impossible. It is, I would say, a double-speared effort.

Euractiv: Staying on the refugee crisis, what is the role of Turkey? The EU is putting all its hope in Turkey to stem the refugee flows, but some suspect that Turkey instigated the refugees to leave for Europe…

Vladimir Chizhov: I believe that President Erdogan and the Turkish government are playing a dangerous game, trying to assert Turkey as the key to any problems in the wider region, and of course with quite obvious imperial, I would say neo-Ottoman, ambitions. On the one hand, if you look at the Turkish-Syrian border: it’s a long border, about 900 kilometres, 80% of which in the Western and Eastern sections is controlled on the Syrian side by Kurdish forces. And there is a gap in between, which is the main thoroughfare for fighters joining ISIL and other terrorist organisations, coming through Turkey to Syria, coming from all parts of the world, including my own country or yours. In the other direction comes the flow of illegal oil and other materials. And also refugees.

So instead of sealing it, as was the essence of signals sent to Ankara by Washington, Brussels, other European capitals – please Mr. Erdogan, close the border – he never did that. Unfortunately the EU today is asking Turkey not to close the border while Erdogan is trying to do just that. So EU’s position on that particular issue has become diametrically opposite to the previous one.

Euractiv: The EU called Turkey to open the border to allow refugees from Syria to enter into Turkey.

Vladimir Chizhov: And then?

Euractiv: Because this is international humanitarian law.

Vladimir Chizhov: I understand that. But as long as Turkey declares that its number one enemy in Syria is not ISIL, not Jabhat al-Nusra, but the Kurds, Turkey will not be a positive factor in this overall combination.

Euractiv: Last time we discussed that nobody fights Islamic State, everyone fights someone else, including Russia by the way.

Vladimir Chizhov:  And when you said that I didn’t agree, remember? And I don’t agree today. I believe that what has been achieved in the last few days by Russia and the United States is a good, solid promising basis for a solution. Because it draws the line that every participating group in the Syrian conflict needs to decide which side they are on. If they support this initiative, they should declare so by noon local time on 26 February, this coming Friday. If they don’t, it means they place themselves on the side of ISIL and Al-Nusra. And that would leave them as legitimate targets for continued air strikes by both Russia and the coalition led by the USA.

Whereas those who by that time would have declared themselves in favour of this proposal would be eligible to participate in further Geneva talks which should re-start as soon as possible.

Euractiv: Is the rapprochement with the US in Syria contributing for a similar rapprochement on Ukraine-related issues? I hear that some East European countries worry that the US may abandon Kyiv.

Vladimir Chizhov: I think the biggest danger if for Kiev to abandon itself.

Euractiv: You are referring to the complicated political situation?

Vladimir Chizhov: I’m referring to the acute political crisis, on top of the economic crisis in Ukraine. We will see how they will come out of that. I don’t see a direct link between the two conflicts, the one in Syria and in Ukraine, as some people in the West do. Actually we have had differences with the US and the EU on Ukraine for two years already, and during that period we managed to cooperate on other issues, like the Iranian nuclear problem, like Syria in terms of getting rid of chemical weapons there. I hope that an overall improvement of the political climate might be conducive to overcoming other differences, but as far as Ukraine is concerned, I think a lot needs to be done by the Ukrainians themselves.

I don’t know which path they will choose. They may chose the path of early parliamentary elections. They may choose a different path. But it doesn’t relieve Kiev from the need to fulfil its obligations formulated in the Minsk agreements. And I hope that both the US and the EU, and particularly Germany and France as members of the “Normandy Four”, will produce the required pressure on Kiev to stop procrastinating and take the necessary steps.

Euractiv: It seems that they are putting pressure, and that the utmost argument is that if Ukraine doesn’t deliver on its side of the Minsk agreement, then the sanctions on Russia will be lifted.

Vladimir Chizhov: That’s a clear enough signal. But I don’t understand why this link between the sanctions and the Minsk agreements was made in the first place. The essence of the Minsk agreements comprises certain steps by the warring parties, meaning Ukraine and the self-proclaimed Donbass republics.

Euractiv: With which Russia has a lot of influence.

Vladimir Chizhov: Yes, comparable with the influence of the West on Kiev. Which is not 100% in both cases, but substantial.

Euractiv: Anything else cooking on the EU-Russia agenda?

Vladimir Chizhov: We are open for business as soon as the EU decides to rectify the situation that it itself created by freezing our negotiating dialogue formats. We are not going to ask or beg the EU to lift those unilateral restrictions. It’s a problem that the EU has created, and it’s up to the EU to take the necessary decisions. I think both EU member states and Russia have suffered from this abnormal situation. If you ask people in the business community here in Brussels, and I hear from them on a regular basis, they are quite unhappy. So we will see. I’m watching how a critical mass in favour of normalisation is growing. There will be a moment when it will really become a critical mass, in the terminology of nuclear physics.