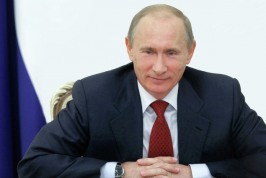 On December 1, 2012, Russia will assume the presidency of the G20, the informal grouping of the world's biggest economies. We see this above all as a chance to offer our partners a positive and substantive agenda aimed at resolving the common problems of concern to all countries. We will of course also make effective use of our presidency to address our long-term national goals and strengthen Russia's place in global economic governance.

The G20 was established in 2008 and has become an important instrument in managing and responding to crises. Through their coordinated action, in just a short period of time, the participating countries managed to stop the economic slide and tighten supervision over national financial systems. They then began systemic transformation of the international financial and economic architecture to bring it into line with twenty-first century demands and started developing the mechanisms that will give us maximum protection from risks, strengthening mutual trust, and giving the impulse for sustained and balanced global economic development.

We believe that the Russian presidency's main task will be to focus the G20's efforts on developing measures to stimulate economic growth and create jobs. What will this require? We think the answer is clear: investment incentives, trust and transparency in markets, and effective regulation. These priorities will be at the heart of discussion of the various issues traditionally on the G20's agenda. These issues include the state of the global economy, implementing the framework agreement for strong, sustainable and balanced growth, facilitating job creation, reforming the currency and financial regulation and supervision systems, stability on global energy markets, stimulating international development, strengthening multilateral trade, and countering corruption.

We will also include two new issues on the financial agenda: financing investment as a basis for economic growth and job creation, and modernising national public borrowing and sovereign debt management systems.

Thus, the Russian presidency will ensure continuity in the G20's agenda and fulfilment of earlier commitments, while at the same time offering new approaches to examine.

Russia is ready for the broadest possible cooperation on reaching the G20's objectives. In order to make the G20's work more effective and transparent and increase trust in what it is doing, we will hold broad consultations with all interested parties, with countries not part of the G20, and also with international, expert and trade union organisations, and business community, civil society and youth representatives. Practice shows that global measures are only effective when they are based on the views and take into account the interests of different groups.

We hope that Russia's presidency of the G20 will help to consolidate the participating countries' efforts in order to achieve our common goal of resolving the most serious problems facing the global economy, ensuring sustainable growth for the entire international community's benefit, and giving millions of people around the world a better standard of living.

Russia is open for dialogue and constructive cooperation.