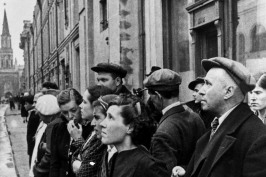 22 June is a special day in the memory of peoples of our countries.

That terrible page of history brought untold sorrow, tears and despair. It claimed and ruined countless lives. But the Nazis could not break the will of the peoples of the Soviet Union. Our fathers, grandfathers and great-grandfathers fought bravely to defend our homeland, our future and peaceful life, not only in our countries, but throughout Europe.

The Nazi invaders' plan for a swift defeat of the Red Army failed. From the first days of the war, the aggressor faced righteous resistance and firm determination to fight to the end – in a united effort the peoples of our countries repelled the Nazis, shared miseries and hardships of war, and celebrated common victories. Everyone, young and old, stood up to fight Nazi ideology, cruelty and the trampling of human values: fierce battles were waged on the battlefields, partisans and underground fighters carried out insurgent operations in the occupied territories, and people in the rear worked for the front sparing no energy or health. This self-sacrifice, fortitude and faith in justice enabled the peoples of the USSR to defeat the fascist invaders.

Today, those living both in our countries and all over Europe owe their peaceful lives and well-being to the heroic deed of the peoples of the Soviet Union.
It was the Red Army that made a decisive contribution to the defeat of the Third Reich.

Unfortunately, time is unstoppable and every passing year leaves ever fewer witnesses to those terrible times, ever fewer of our veterans, our heroes. It is our duty to keep the memory alive, defend the truth and their good name, and preserve peace. Attempts to falsify history and revive aggressive war rhetoric are painful to watch. The fight against historical memory – destruction and desecration of monuments to the fallen liberator heroes in certain countries – is an outrage. We strongly condemn such actions and call for jointly countering attempts to rewrite history, glorify the Nazi movement and whitewash Nazi criminals.

Reaffirming our commitment to fundamental principles and norms of international law and the UN Charter as one of outstanding outcomes of Victory, we wish to remind the world community of the need to respect our common history and the moral compass enshrined in the afore-mentioned documents.

On the occasion of the 80th anniversary of the outbreak of the Great Patriotic War, we reiterate our call to assess the past and the present fairly and justly, reflect on timeless values and join efforts to build a world without wars and conflicts.