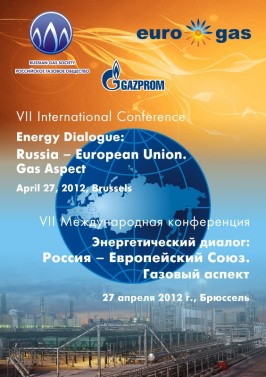 The 7th International Conference “Energy Dialogue: Russia – European Union. Gas Aspect” organised by the Russian Gas Society and Eurogas with support of the Permanent Mission of the Russian Federation to the EU will take place at the Conrad Hotel in Brussels on 27 April 2012.

The following central issues will be raised:

The programme of the Conference includes meetings between Russian and EU delegates with representatives of gas companies, as well as press conferences.

The Conference traditionally held in Berlin and this year organised in Brussels, attracts renowned politicians, public figures, members of parliaments, scientists, top managers of major energy companies from Russia and the EU as well as heads of international organisations.