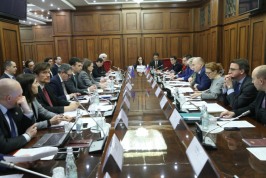 The 18th meeting of the Joint Committee on implementation of the Readmission Agreement between the Russian Federation and the European Community of 25 May 2006 took place in the Russian Ministry of Interior.

Officials from the Directorate General for Migration and Home Affairs of the European Commission, the European Border and Coast Guard Agency FRONTEX, European Union Delegation to Russia and experts from EU Member States participated on the EU side.

The meeting focused on an in-depth discussion of practical aspects of cooperation in this field as well as plans for the next year.