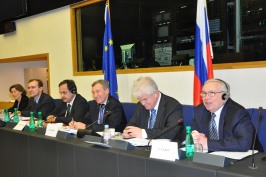 The Russia-EU Parliamentary Cooperation Committee held its 13th session, which concluded the programme of its work in 2010, on 15 and 16 December 2010 in Strasbourg. A representative delegation of members of the Federal Assembly of the Russian Federation headed by Mr. Andrey Klimov, Deputy Chairman of the Committee for International Affairs of the State Duma, participated in the event.

A number of issues was discussed at the session co-chaired by Messrs. Andrey Klimov and Knut Fleckenstein (political group “Progressive Alliance of Socialist and Democrats”, European Parliament), including the outcome of the Russia-EU Summit held on 7 December 2010 in Brussels, implementation of the “Partnership for Modernisation”, results of parliamentary contacts in 2010, including three meetings of Working Groups: on cultural cooperation (1 April, Moscow), on human rights and visa facilitation (27-28 May, Perm), and on the role of Russia, EU and NATO in maintaining international security (30 September, Brussels).

While discussing the “Partnership for Modernisation” many parliamentarians expressed the view that this cooperation is mutually beneficial and vital for both sides. Mutual interest in developing cooperation in economic, research and educational spheres was noted.

While examining the vase issue it was stressed that both sides were facing a number of technical tasks, which should be fulfilled in order to introduce a visa-free travel regime, but there were no insurmountable obstacles along this track.

Speaking at the session, Mr. Vladimir Lukin, Russian Ombudsman, gave his vision of the human rights situation in Russia. A frank discussion on many vital issues took place. Mr. Vladimir Lukin gave exhaustive answers to concerns expressed by members of the European Parliament without trying to conceal existing problems or undervalue them. A low level of legal literacy was mentioned as Russia’s most important problem on the human rights track.

In the view of Mr. Andrey Klimov and Mr. Knut Fleckenstein, the Russia-EU cooperation in 2010 became generally more intensive and result – oriented. The work of the Committee in 2010 demonstrated that Russia and the EU had not only a big potential to develop relations, but also a desire for that and readiness for reciprocal consideration of interest.

It was no coincidence that all the working groups in 2010 achieved concrete results that were reflected in the Final statement of the Committee, comprehensive document describing work progress in 2010 and outlining areas of further cooperation.

A plan of events for 2011 was finally adopted. Meetings of three working groups are envisaged (21-22 March in Brussels, 26-27 April in Astrakhan and 17-18 May in Sochi). The 14th meeting of the Russia-EU Parliamentary cooperation committee will take place on 1-2 September 2011 in Warsaw.