12th round of negotiations on the New Russia-EU Agreement completed 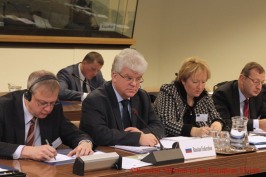 A Steering Group plenary session was held in Brussels on 17 December, 2010, summing up the results of the 12th round of negotiations on the New Russia-EU Agreement. Ambassador Vladimir Chizhov, Russia’s Permanent Representative to the EU, headed the Russian delegation, and Mr. David O’Sullivan, Director General for External Relations of the European Commission, led the EU delegation.

Progress was stated in drafting of four main chapters: on political dialogue and external security; on cooperation in the field of freedom, security and justice; on sectoral economic issues; on culture, research, education, media, sports and youth policies. A number of articles has been closed as agreed ad referendum.

Possible contents of trade and investment provisions of the future agreement were discussed in correlation with the perspective of Russia’s WTO membership and the functioning of the Customs Union of Russia, Belarus and Kazakhstan. In this respect the importance was underlined of progress achieved in negotiations on Russia’s accession to the WTO, which was fixed in the Memorandum of Understanding signed in Brussels on 7 December 2010 and confirmed at 26th Russia – EU summit.

It was agreed to hold the next 13th round in the beginning of February, 2011.