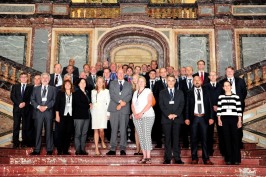 From 22 to 25 June 2015 the 11th Meeting of Heads of National Drug Law Enforcement Agencies (HONLEA) Europe, was held in Brussels under the auspices of the UN Office on Drugs and Crime. Participants included senior officials of anti-drug authorities of 18 European countries, as well as Israel, United States, UNODC, Council of Europe, European Commission, European External Action Service, Europol and the European Monitoring Centre for Drugs and Drug Addiction. The Russian delegation was led by Nikolay Evgraschenkov, Adviser to the Director of the Federal Drug Control Service of Russia.

The meeting discussed a wide range of issues concerning the fight against drug trafficking and prepared a draft set of recommendations to the governments of the HONLEA Member States.