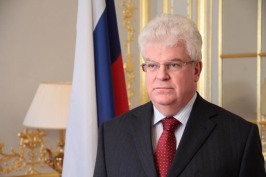 Europe and Russia: moving towards a new era?

I am happy to be here again addressing another “Economist” Conference. It almost started to look like a tradition holding them at moments coinciding with turning points in Greek political life. Hopefully, these are now over, and Greece will enjoy a period of upward economic development and progress in relations with its neighbours and other countries, including certainly my own.

As far as Russia – EU relations are concerned, 2019 is a special year. It is particularly pleasant to mention that our Partnership and Cooperation Agreement was signed on June 24, 1994 here in Greece, on the island of Kerkyra. This document, which formed the basis for building economic relations, a multi-layered structure for cooperation and established a framework for political dialogue, remains to this day the legal foundation for comprehensive development of Russia-EU dialogue on a wide range of issues. Also, in December we will celebrate 30 years of diplomatic relations with the European Communities.

Over the past years, our partnership with the EU has had its ups and downs. In my opinion the fact that in 2012 Russia and the EU traded at the level of a billion euros a day is a spectacular example of the scale of our cooperation.

I can only add to this that the current abnormal state of our relations does in no way correspond to the objective interests of our countries and peoples.

In the meantime, we are witnessing certain processes unfolding in Europe and beyond. The basically objective globalisation process did not follow the path that those who had originally envisaged it as a means to ensure triumph of the Western liberal world order expected. It became obvious that other continents and centres of power, rather than the traditional West, were starting to play an increasingly decisive role in it. Needless to say, all these trends combined have led to a crisis of dominance of the liberal idea. As a result, states that previously advocated the principles of free trade and fair competition started using the language of trade wars and sanctions. Even the toolbox of Western intervention against competitors – including some previously close allies – was adjusted to include provocations, disinformation, attribution and sanctions – the latter viewed as the favourite instrument of diplomacy.

Increasingly attempts are being made to act in circumvention of international law, to wilfully interpret generally recognised approaches presenting that as some kind of a rules-based order. Moreover, these rules are elaborated privately by a small group of countries and are fine-tuned according to the changing political environment. In fact, such an order implies double or even triple standards: some countries consider themselves to be bound by neither the law nor even the rules, others are obliged to act in transatlantic solidarity with them and a third group can be accused of anything without evidence of wrongdoing.

Obviously, such state of affairs cannot be deemed acceptable by us. We are against political diktat and blackmail in international relations, we condemn the desire of certain countries and politicians to assign themselves the right to “determine the feasibility” and valid parameters of legitimate cooperation between other states. We believe that today to overcome this paradigm leading to endless conflicts and fights of everyone against everyone collective efforts of all sensible forces are needed more than ever.

Perhaps future historians will judge it as an inadequate response to the demise of the traditional world order. Good for them. But today we all need to face the current controversial realities in a way that would not exacerbate the global state of affairs.

Unfortunately nowadays misperceptions of different issues are quite frequent. When Russia is the topic the first thing that pops up, often blocking the real picture, are the alleged hybrid threats and fairy tales about interference in the internal affairs of other countries. Regrettably I have to state that in this regard Europe has been following the American way. Since 2016 when the so-called “Russian collusion” story was instrumentalised in the US as a means of internal political leverage, discussing anything with Washington in a serious manner became next to impossible. But, let me assure you, we are still trying, in full recognition of the huge responsibilities our two countries bear to maintain global security and stability. Unfortunately now it appears to be the turn of EU member states to use Russia as a pretext to settle scores and resolve disputes.

Let me give you a fresh example. Last May a huge scandal erupted in Austria, concerning the leaders of the Freedom party, which was part of the government coalition. The whole event turned out to be a clear setup, a classical provocation. But the result was collapse of the Austrian government and snap elections. I would like to stress that it was Vienna who, among others, often advocated for improving the EU – Russia relationship.

One more example of above-mentioned misperceptions is the assessment of Russia’s role in the Balkans including its historical aspect, which is sometimes perceived in a distorted manner. To my mind this is unfair because my country is simply accustomed to calling things by their proper names and does not shy away from doing so, especially when we are talking about breaches of international law.

For instance, many blamed Russia for interference in internal affairs of Greece and what is now Northern Macedonia as they were drafting the Prespa Agreement, though such accusations did not have any ground. The only thing Russia did was to state obvious shortcomings of that document and, in particular, of the procedures involved in its promotion in the light of constitutional and international law. I believe that no genuine professional in the sphere of international relations would contest the fact that notwithstanding its significant sacrifice for the sake of freedom and independence of Balkan nations, Russia – contrary to others – does not aspire to any exclusive rights there, does not impose friends or enemies on the Balkan nations. We are ready to cooperate with the EU and its member states, among them definitely Greece, on the Balkans including on helping to settle remaining conflicts in the region.

Now, what is going to happen with the Russia-EU relations it the next, say, 30 years? Figuratively speaking I reckon that today we are at a crossroads. We need to jointly define the direction of our cooperation, something that is made more difficult by the current state of affairs within the EU which is engulfed by its own internal problems. There are on-going debates on the principles of its functioning, on identity, on economic perspective, on the balance of the national and supranational and reflection on external factors influencing internal processes within the EU. All these factors put together seem to limit Brussels’ ability to maintain substantive dialogue with third countries, including Russia.

Nevertheless, we should not be discouraged by that. Economic, cultural and historic ties between Russia and EU member states are so important that the new cycle of normal and even closer relations is inevitable. It will become possible when the EU defines the model of its future development and starts to understand how to address current global challenges. Putting it bluntly, in order to maintain its position in an increasingly competitive multipolar world the EU and its member states need to start thinking of uniting their efforts with other pillars of our common Eurasian civilisation, primarily Russia. After all, our common geography, for example, defined by certain EU leaders as us “sharing the same landmass”, pushes us to respond collectively to trans-border threats such as terrorism and drug trafficking. We are facing universal challenges regarding the adaptation to demographic and climate changes in the world as well as the establishment of a new model of innovative economy and modernisation of its technological basis. It is absolutely evident that coupling the economic potentials of the two largest integration projects on our continent – the EU and the Eurasian Economic Union – can only bring added value.

I cannot conclude without admitting that certain signs of understanding of the need to revitalise Russia – EU dialogue are emerging. During the Saint-Petersburg International Economic Forum on 6-8 June my co-panelists at a session of the Valdai Club representing different EU countries, called for a speedy lifting of anti-Russian sanctions. On June 26 Russia’s membership in the Parliamentary Assembly of the Council of Europe was restored. On June 29 President of France Emmanuel Macron, at a press conference after the G20 Summit in Osaka, stressed the necessity of building the new architecture of trust and security between the EU and Russia. Earlier this month, hosting President Putin in Rome, Prime Minister Conte made similar statements.

Let’s hope that politicians who are getting EU top jobs this year will show enough pragmatism to start overcoming the inertia we see now in EU-Russia relationship. As they say in Greece, “You help me, I help you and together we climb the mountain”.

My personal conviction leads me to believe that our future relations with the EU will not be a simplistic return to “business as usual”. Actually, both sides have admitted their lack of desire to restart a search of adjectives, choosing among “strategic”, “advance”, “priority” or other partnership.

I believe we should focus more on substance rather than slogans, thinking more of a pragmatic approach, based on mutual interests. If that is how we describe the top of that mountain, then it will be well within reach.